Wait, I thought this was a wine blog

Sorry wine lovers, but while recently watching The Kingsman: Secret Service I got so irritated I felt import need to write about martinis. The reason being that, once again, Hollywood had maligned one of my favorite cocktails. In this episode, the character Galahad gives martini mixology instructions that finishes with “…Stirred for 10 seconds while glancing at an unopened bottle of vermouth.” Ugh! For the record, a martini without vermouth is actually ordered as; gin, straight, up, with olives. It is NOT a martini. More on this later. The Kingsman: Golden Circle has the younger Galahad ordering a martini in a rustic Kentucky bar only to get a whiskey. The bartender answers, “In these parts that’s a martini.” Seriously? I’m pretty sure a state that invented the Mint Julep can properly mix a martini. That’s just Kingsman. Don’t even get me started on Bond films. Don’t get me wrong, I am a Bond fanatic, however his taste in martinis is appalling. First off, no proper Englishman would ever order a vodka…anything. Russians drink vodka. English drink gin. The damn stories are literally about cold war espionage.

Come on! At least Ian Fleming’s concoction of gin, vodka, and Lillet was named something else (Vesper), which Daniel Craig creatively tried to rectify in Casino Royale. In other books and movies Bond vascillates, but ultimately seems to prefer vodka. More importantly, never for any reason, should a martini be shaken. We are not making a Ramos Fizz. A martini should be served beautifully clear and ice cold. No, Hollywood has not been kind to the Martini. So please, let’s take a moment to give it its due.

The history of the martini is a bit muddled. Not surprising, with literally just 2 ingredients just about anybody could have stumbled on to it. Wikipedia says it is probably the drier cousin of the Martinez, which originated in San Francisco in the 1860s and was named after a little town across the Bay. However, there are many disputes to this claim. The real popularity of the Martini didn’t occur until the swinging 50s and 60s when young boomers were eschewing their parent’s brown liquor for the trendier gin and vodka drinks projected by Hollywood. While it would take decades for Whiskey to recover, the Martini never really lost its status. There are, like any cocktail, many variations. However, when referred to as one word “Martini” we are generally discussing the Dry Martini. 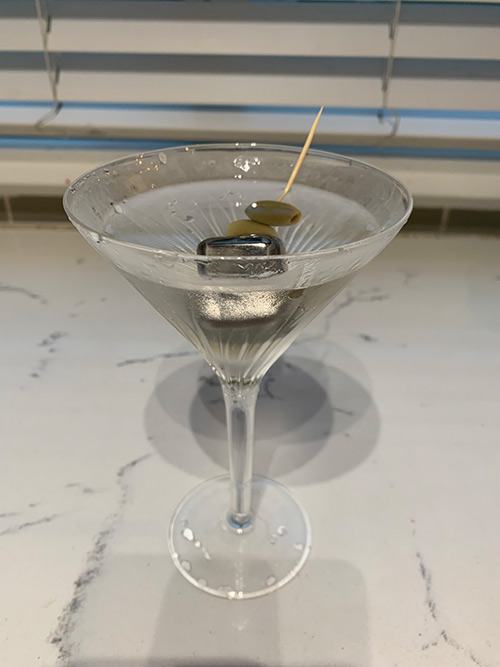 My Martini. Stirred, not shaken.

Let’s start with my own experience with the Martini. My family is divided by “Scotch/Irish” on my mother’s side and English on my father’s. The Scotch/Irish preferred beer and brown liquor. The English would drink just about anything – just as long as it was a martini. I remember my grandfather used to make up a “batch” in what appeared to be a lemonade pitcher that came with its own glass stir stick. He used Fleischhman’s gin and whatever vermouth was on sale. Add ice, stir, and serve. His martinis were always served up with olives or pickled onions. I was once allowed a sip in my youth. A negative experience that left its mark on me until I was well into adulthood – by design, I’m sure. After which, I eventually learned to appreciate the tradition, dignity, and elegance that is…the Martini. My preferred martini is 2.5 parts Junipero gin, 1 part Dolin dry vermouth, stirred, served up with 2-3 medium/small pimento stuffed green olives.

Gin. However, since there is no other cocktail made of vodka and vermouth, Vodka Martinis are allowed. Just be certain you order it as such. Don’t try to get away with “Martini please, with vodka”. If I were mixing you would get a gin martini with a vodka splash. While I understand that some are put off by the taste and smell of juniper berries, I suggest you try different botanical gins until you find one that works. Ian Fleming’s literary James Bond ordered martinis that were half vodka, half gin. Perhaps start there and thumb your nose at the common Bond movie wannabe.

Permitted. Martinis are potent by design and should remain cold to the last sip. If ice helps get you there, so be it.

Permitted. The briny flavor from a splash of olive juice can hide the imperfections of mediocre gin and/or vermouth. However, if you have access to top notch gin, let it shine! 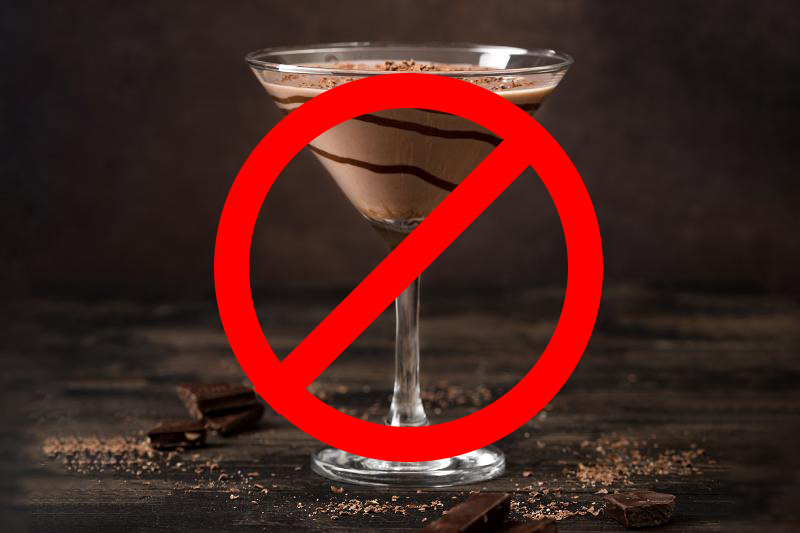 Not permitted. These are, IMHO, abominations. In fact, I refer to them as “Abomitinis”. They are really Cosmos in disguise. With the exceptions for the “Vodka”, “Wet”, “Dry”, or “Perfect”, any cocktail who’s name ends with “Martini” is definitely NOT a martini. The trend started with the Appletini, which is permitted since it does not use the actual word “Martini”. The glass does not define the cocktail. If for some ungodly reason, you decided to pour a daiquiri into a martini glass would you call it a Daiquiri Martini? No, you would not!

Spray, Rinse, or Hold the Vermouth

Not permitted. While I understand the allure of good gin, vermouth is part of the cocktail. The original recipe was 2 parts gin to 1 part vermouth – which I still do in cases where the vermouth outshines the gin. Most of the time omitting vermouth happens because one has had a bad experience with off (vermouth does eventually go stale like any wine) or mediocre vermouth. Many bars unfortunately don’t always stock good vermouth or do not check their freshness. In these cases, by all means order a gin straight, but don’t call it a martini. On a side note, I commonly see this with Bombay Sapphire lovers. Personally, I’ve come to the conclusion that Sapphire does not pair well with vermouth, but is delicious straight and makes an excellent gin and tonic.

“One martini is all right. Two are too many, and three are not enough”

New Yorker cartoonist James Thurber once said, “One martini is all right. Two are too many, and three are not enough”. Alluding to how their potency can send one over the edge. However, my grandmother reversed the phrase one evening after inexplicably walking off a perfectly sound pier into a lake. After which she declared, “two are not enough and three are definitely too many”. It’s important to keep in mind that my grandmother drank martinis out of 4oz glasses. Served in this volume, two cocktails are not unreasonable. However, today it is common to find high-end bars serving $20 martinis in glasses that appear to have the volume of upside-down highway cones. There are two problems with this; One drink now becomes too many…and perhaps more importantly, sipped in moderation the liquid eventually begins to warm. There is nothing more off-putting than drinking a warm martini…and wasting $20 to boot!

As long as it doesn’t inhibit the flavor of the martini, just about any garnish is acceptable: stuffed olives, pickled onions, lemon twist, whatever suits your fancy. If for no other reason, to give the mixologist some creative outlet.

Contain yourself. There are many other cocktails for you to play with. Leave this classic alone. That being said, a drop of orange bitters or splash of Creme de Violet is mostly harmless.

Gin has a torrid history. Ostensibly, it was invented by the Dutch in the Middle Ages for medicinal purposes (some of us still use it in this way). However, gin became a plague in England during the early 1700s in a period known as the “Gin Craze”. Unable to grow good barley for beer, the English switched to gin with devastating results – addicting and killing people in epidemic proportions. “Bathtub Gin” entered our vocabulary in the US during prohibition. It literally refers to the practice of distilling spirits in one’s own bathtub. The results of which ran from dangerous to downright poisonous. By definition, gin is made from a neutral distilled spirit (aka vodka) that is infused with various “botanicals”. These typically include, but are not limited to, juniper berries, coriander, herbs, dried lemon or orange peel, etc.. The original Dutch version was rendered off-dry by whatever was infused post distillation. However, once the English got a handle on things they decided on a drier style that infused the botanicals during distillation, calling it “London Dry”. Martinis should be made with London Dry Gin. Cocktails made with other types of infused spirits, sloe gins, barrel-aged gins, etc.., again, should not to be called martinis.

Here are a some of my favorites in the affordable easy-to-find category:

The martini’s brown liquor cousin, the Manhattan is much the same concept; booze and vermouth. Manhattan aficionados croon about the sweet vermouth they use and how it makes the drink. No one would ever attempt to make a manhattan without vermouth because that’s what Old Fashions are for. Inexplicably, martini lovers are less picky and have less options to choose from. However, I advise it be taken seriously. Like the Manhattan, vermouth can make or break a martini. Dry vermouth not only softens the spicy blow of the gin, but also adds floral and fruity character to the drink. It adds the necessary elegance and sophistication that is the Martini.

Here are my suggestions. Quality dry vermouths are pretty reasonable, so don’t be a cheapskate:

The Martini is definitely an acquired taste. However, unlike Manhattans, quality ingredients are relatively affordable. It does not require a well-stocked bar. Nor does its maker have to be an accomplished mixologist. And, despite its simplicity, the Martini lover can sip with an air of sophistication not available to beer or margarita drinkers. Respectfully, the Martini.