The Mission and It’s Grape

Prior to the Gold Rush, California was sparsely populated by Californios, Native Americans, and a small amount of white settlers. Wine grapes were mostly relegated to Missions from San Diego to Sonoma and winemaking was under direction of their residing Jesuits. The primary grape grown was a relatively uninteresting vitis vinifera grape known as a “Mission” grape. Current DNA technology suggests that this grape is a red cousin of the Spanish Palomino grape also known as Angelica. The white Palomino is the primary grape in Sherry. George C. Yount brought some Mission clippings from Mission San Francisco-Solano to his ranch in what is now Yountville. These are the earliest recorded plantings of grapes in Napa and Sonoma. Starting in 1849, however, all of that changed.

After the discovery of gold at Sutter’s Mill immigrants of all races and nationalities descended on California. In 1849 alone the tiny pueblo of San Francisco jumped in population from 1,000 to 28,000! Native American populations were decimated, the Californios were run out after California was hastily declared a state in 1850. American and European gold seekers began staking their claims. Gold opportunities for individuals dwindled as large scale corporations moved in. Many of these would-be miners took an entrepreneurial approach to their disappointment. Levi Strauss made denim trousers tough enough to withstand the rigor of mining. Henry Wells and William Fargo developed a financial services company to help miners monetize their claims. These were desperately needed, and in a predominantly single male population–so was alcohol.

In truth, if California was mostly populated by Americans there would have likely been a lot more corn planted for the purpose of making Whisky. This was the adult beverage of choice of the country at the time. However, this was not the case. There were many European immigrants seeking fortune, and since returning to their homeland was significantly more difficult, they were perhaps more determined to make a go of it. It would be the Italians, Swiss, French, and Germans who would take on the beverage role…and their choice was wine. Enter the beginning of the California wine industry. 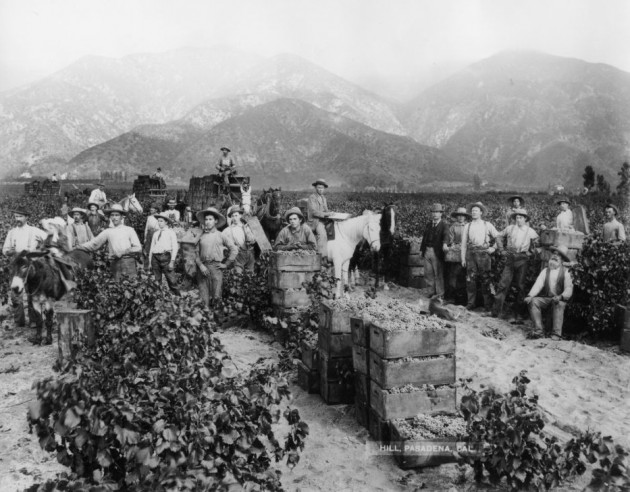 Vineyards in Hastings Ranch in the late 19th century. Courtesy of the Archives, Pasadena Museum of History (A2-15-1)

In the early stages (1850-1860), there were no regions, varietal purity, or much appreciation for quality. If you could plant grapes and knew how to make wine from them, you were in business…and business was good. Thus, grapes appeared everywhere; Orange County to the south, Sonoma County to the north, and Lodi to the east. As fast as old growth redwood forests of the Santa Cruz mountains could be cut down, grapes were planted in their place to supply the growing San Francisco Bay Area. As deforestation headed north a railroad was built to bring the timber back to Bay Area ports and grape growing began to wick its way up the line. Still, the problem was quality. Up until the mid-1850s the lowly Mission grape was king among a few other ne’er do wells. Wines were labeled “California Burgundy” and “California Bordeaux” representing neither the region nor their varietals. Despite all this, wine was fast becoming the preferred adult beverage of California.

Prior to 1860, Sonoma and Napa were not major wine producers. More grapes were grown close to major population centers. The one redeeming value of the Mission grape was its hardiness and ability to be grown just about anywhere in the state. In the next chapter we’ll discover how in 1858 the center of the California wine industry suddenly moved to Sonoma, largely due to the influence of one man…the mysterious “Count” Agoston Haraszthy. The first of a long list of colorful personalities associated with wine in California.